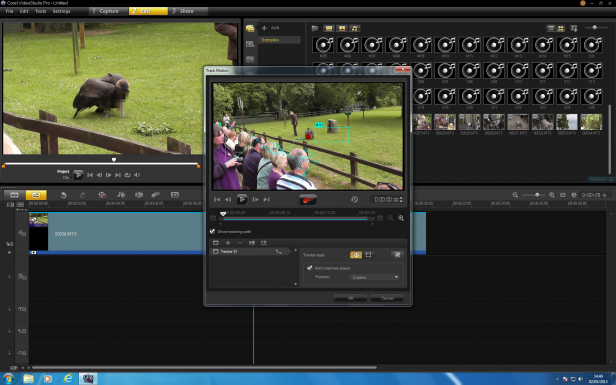 All of these Corel video-editing packages open to reveal a classic interface, with preview timeline and content windows all evident. However, the workspace is also flexible allowing dual monitor set-up and the possibility to drag, drop, and stretch all the windows into the configuration that suits the user. This allows you to organize the work-flow depending on which point of the creative process you are focusing on.

The two modes provided give the opportunity to have a simplified overview for a quick drop and drag operation for less complex projects, in the case of ‘storyboard’ view, or a more in-depth multiple track ‘timeline’ view allowing the user to overlay video, stills and audio to create effects that are more visually pleasing with a good visibility of the content. The track manager allows you to add or remove video and audio tracks making for effective use of the available screen area. Any added effects are indicated by an icon sitting on the timeline content giving a quick visual reference of the post-production work carried out on individual clips. Edited clips are saved as new files so the originals stay intact, whilst clips sat on the timeline can be simply dragged to increase or decrease their duration without the necessity of cutting.

The standard transitions and titles are more than adequate, if not as numerous as other packages, and the royalty free audio clips are a nice touch but should be considered as more of a showcase item as the beats can sound a little cliché. Whilst standard formats of your own music library can be imported on to the timeline, the Smart Sound audio format restricts the possibility of using your own loops in its Quicktracks library. There is also a surround mixer if you want to take the time create your ambiance.

Time-lapse and stop-motion is easily handled with a self-explanatory interface showing frame removal positions, and can be used to great effect to shorten moments you’d like to keep, but appear mind-numbingly never-ending viewed at normal speed.

The whole process is relatively smooth and the technology used can keep pace with all but the most athletic editor. Provided that you heed the minimum specification recommended for each of the products, the HD or 3D formats that are rapidly becoming the norm will not pose processor problems.

Ultimate versions have the added bonuses of being bundled with the Mercalli SE image correction and stability manager (although basic) , which is almost a must for any sports cineaste, and the Boris Graffiti titling software for the more adventurous.

Corel VideoStudio Pro uses the classic Explorer mode to import videos, stills, and audio from all manner of devices, whether they are held on your hard drive, exterior camera, or require ripping from a CD or DVD of one of your previous projects. All content is then held in tabs and options can be switched on or off to view single formats i.e. audio only if you are concentrating on the soundtrack.

There are enough export options to suit everybody’s needs from the web to Blu-ray, passing by all the obvious mobile and tablet formats. Even 2D can be rendered into a 3D simulation. Direct uploading to social media sites is also possible.

Disc menus and chapters are no-nonsense affairs and everything is burnt without the need to export to another tool.

Corel VideoStudio offers a good street level product, a higher background spec, but a few less visual offerings. The ProX5 version is one of the first products on the market to have Sandy Bridge and Fusion CPU optimizations, along with HTML5 output, but do you really need it? If your computer is lacking the spec you’ll get better results with ProX4 and all-round performance will be better.