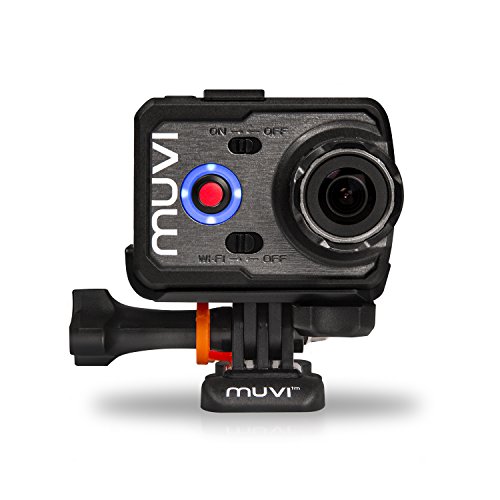 The MUVI K2 takes hands free video capture to the next level. The enhanced MUVI K2 XA-7 Achilles chipset extends your options for filming with a top specification of 1080p @ 60FPS using 19Mbits/sec. The MUVI K2 also comes ready for watersports including the new waterproof case capable of operating at depths of 100 meters (330 feet). The MUVI K-Series has a new smaller & sleeker form factor which makes this camera even more versatile than the previous MUVI HD models. Measuring only 6cm x 4cm x 2.3cm (2.7in x 2in x 1in) the K-Series is the smallest high definition MUVI yet, meaning hands free video capture is easier than ever before. The MUVI K2 records high definition 1080p video at 60fps as well as 720p at 120fps using the new MUVI XA-7 Achilles chipset and has a choice of bit rate default being 19 mbit/s. As well as settings great for hands free video capture the K2 also has settings to enable broadcast quality video capture for professional and presume use. The K2 captures stills at 8, 12 and 16 mega pixel, and now comes equipped with photo burst mode that allows you to take up to 10 photos per second, which is perfect for trying to achieve the perfect action shot. Additional new features include 180 Degree degree rollover which means if you are mounting your K-Series upside down the footage plays back the correct way up and G-sensor auto-start which allows you to set your MUVI to start recording on a change of gravity. You can also now capture interval stills during video capture at a set of pre defined periods so you can save the best still images hands free while capturing footage. The MUVI K2 now has an interchangeable, rechargeable lithium battery which has a capacity of 1500mAh, the largest on the hands free camera market, which will allow up to 4 hours of continuous recording.HD video capture 1080p @ 60fps or 720p @ 120fps at 19 mbit/s
1500mAh interchangeable rechargeable lithium battery for up to 4 hours record
Up to 16MP stills with photo burst and continuous photos to allow time lapse videos
Wi-Fi enabled app to allow wireless streaming & remote recording
Includes waterproof case capable of depths up to 100m