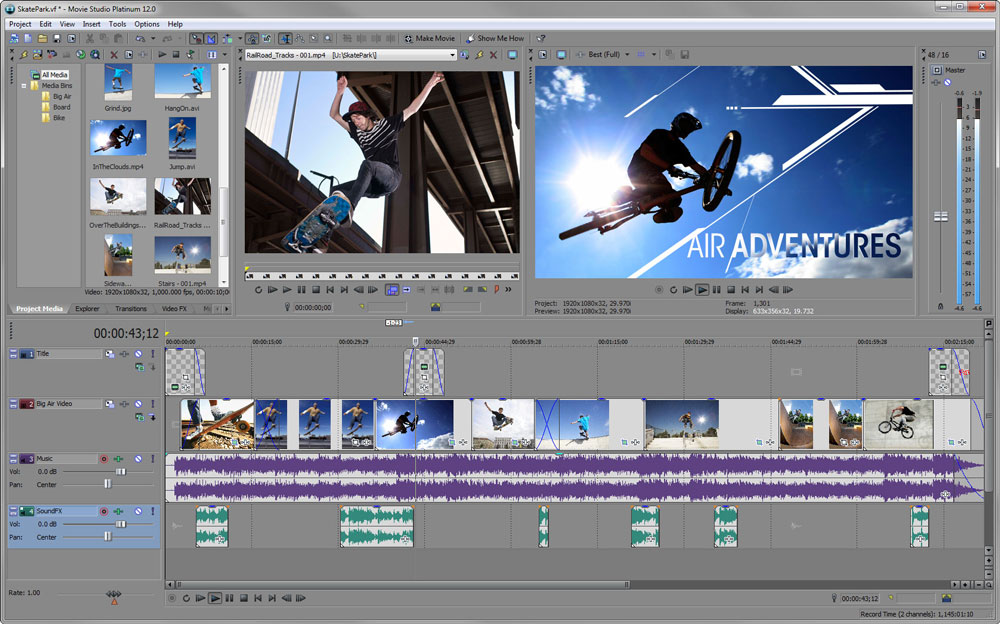 The Sony video editing software comes packaged along with Sound Forge Audio Studio, DVD Architect Studio for both DVD and Blu-ray authoring…hence the Suite name. With everthing on hand, including in-program Show Me How tutorials will get you swiftly on you way for some reasonably rapid results.

Once over the intimidating first glance the guidance from the desktop tutorials will have you up and running relatively quickly. Simple drop and drag makes it easy to place everything that’s needed on the time-line, and with over 500 transitions and effects it would be difficult to run out of choice.

As usual there’s a but; with so many transitions it seems Sony completely forgot to throw in a few templates for the less adept user. A reality that may push some potential costumers in the direction of products that at least allow them to flip a coin when deciding whether to do it the easy or difficult way. That doesn’t change the capacity of the software, it just narrows the target in terms of who would choose it. If you’re one of those, we don’t think you’d be disappointed from a creative point of view, but at this price point it’s neither entry level nor professional so tempting keen newbies without giving them the option is a little unfair.

On the upside the Magic bullet plug-in allows you to set the scene and define your style and lighting with over one hundred presets, and that has to be an advantage worth considering. It could be worth checking if your graphics card is up to the job for fully benefiting from the whistles and bells that the suite offers, as some of the more advanced feature may tax your computer.

Finding your way around the interface on your own takes more time as icon size and direct access tools are fewer than other ‘cleaner’ or more amateur targeted suites, so the workflow is maybe not as intuitive as it could be. People who have already used an entry level product will probably be more comfortable having a better knowledge of tool names and terms.

The Sony Movie Studio Platinum Suite has what it takes for the more adventurous, giving the opportunity to venture into the audio department a little deeper, which is actually not a bad thing. Plenty of add-ons to help progression to the next level of production, so it could be a choice to avoid paying premium price.